Mallorca is the biggest of the Spanish Belearic Islands and a popular holiday destination for tens of millions of tourists from all over Europe and beyond. At the beginning, I was put off by the island's infamous reputation as the island of Ballermann, a satire of fat, overweight German prolet holidaymakers with beer bellies who fly to Mallorca to drink cheap beer, eat sausages and spend most of their time doing stupid things on the beach.
The thing is, Mallorca has so much to offer in terms of history, culture, food and shopping, as well as sceneries. Most working-class holidaymakers tend to cluster in resort towns on the southern and eastern parts of the island, while those who are looking for stylish refinement and natural scenic attractions will head to the more exclusive resorts in the north, such as Port de Soller, seen below: 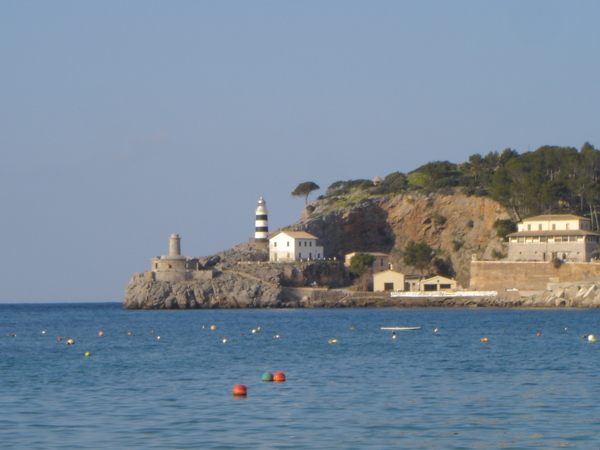 The Lighthouse and the Bay of Port de Soller, about 5km outside of the town of Soller, famous for its Cathedral, delicious Italian galati ice-cream and excellent olive oil from the hills nearby. Another famous tourist attraction is the Tram de Soller, another antique tramway line built in the late 19th century which connects Soller town with Port de Soller, passing through orange grooves and along the seafront en route to the centre of Port de Soller. 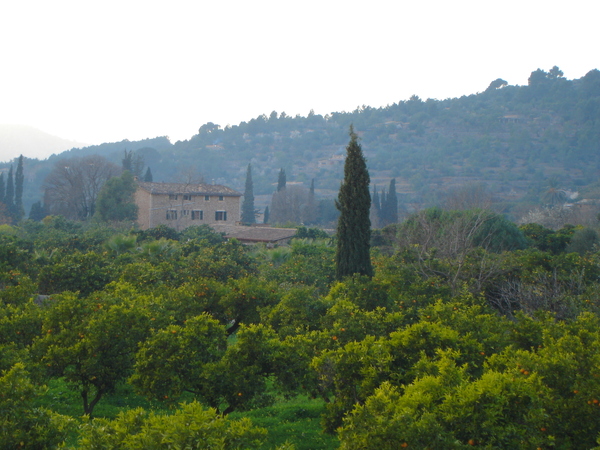 Above: Orange Grooves near Fornalutx, about 5 km outside of the town of Soller, where some of Spain's best olive oils come from.
In order to escape the exceptionally heavy snow storm that swept through parts of Central Europe in the winter of 2006, I decided to spend a few days in the warm, sunny south. Since the flight to Palma de Mallorca left Basel airport very early in the morning, I left Zurich the night before and stayed overnight at Basel Airport.
The Hapagfly (later Tuifly) flight was a smooth one, they offered all passengers free breakfast, drinks and in-flight entertainment on a overhead screen. Upon touch down at Mallorca's International Airport, I was surprised to see how HUGE the airport buildings are: terminals almost twice the size of most international airports in Europe and at least 20 Air Berlin and other German short-haul airlines' aeroplanes standing at the gates and all over the tarmac. Later I learnt that Mallorca is Air Berlin's major hub outside of Germany.
There is a tourist information booth in the Arrival Hall and the staffs are very very friendly. I enquired about the Tren de Soller, the railway line with antique carriages and steam locomotives that runs 5 times a day between Palma de Mallorca and the town of Soller in the north, through scenic countrysides. It is also one of the Mallorca's foremost tourist attractions and is almost always full during the summer. 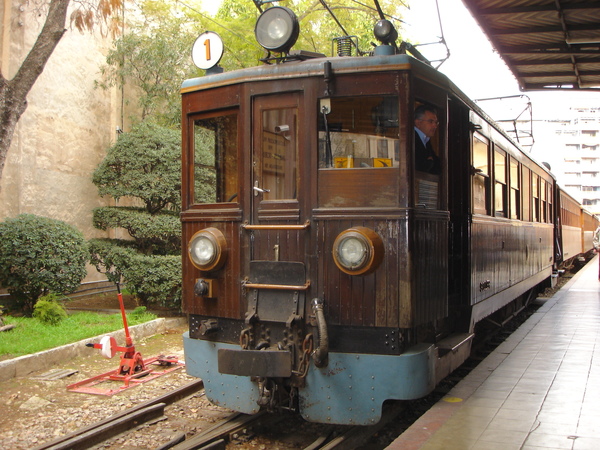 The famous Tren de Soller, seen here at the train station in Downtown Palma. When I enquired about the train time table, staffs at the Airport Tourist Information Centre told me the train was still not in operation due to some tunneling works under Palma's suburban railways station. Thus I decided to travel to Soller by bus instead. However, while I was on my way to the bus station, I saw the Ticket Office of the Soller Tren was open. Out of curiosity, I asked them if the train was running again and to my surprise, they said 'today is the first day the line has reopened and the next train is in 30 minutes'. Great! Immediately I ditched the idea of going by bus and bought a train ticket instead.
The ride was great. All rolling stocks and carriages are period-piece and because it was the first day, I had the whole carriage to myself. As the train slowly rolled out of Palma and into the surrounding countryside, through vineyards, olive grooves and orchards with an average speed of 50km an hour, I felt a sense of excitment all around, Everything about Mallorca feels great and intoxicating. The air is mild and filled with sweet scent of orange, while the less-than-familiar scenery outside seemed to fuel my expectation of what is to come in the next few days. 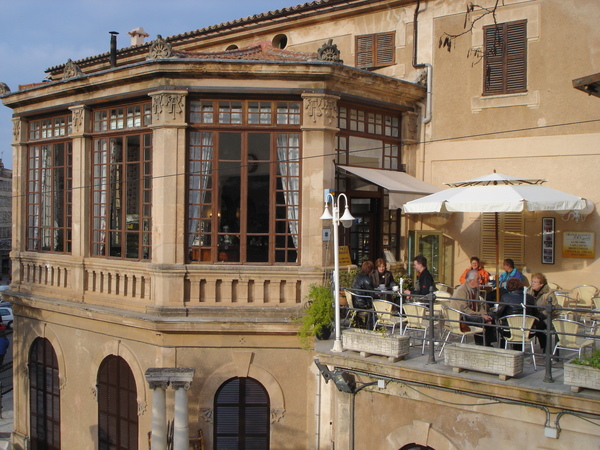 Station Cafe at the train station, Soller.
The train stopped a few times en route at some pretty little towns in the hills. As soon as it approached the station of Soller, however, I was shocked to see the whole station platform full of German-speaking middle-aged tourists eager to secure a place on the carriages, Obviously some tour operators had booked the whole train for its return leg to Palma.
The train station of Soller is a pretty piece of architecture, with a beautiful courtyard displaying contemporary arts and a classy souvernir shop where tourists can bring home some pricey pieces of Mallorca's history. The historic tramway to Port de Soller departs right outside the train station. A conductor looked out of the carriage door to ensure no car was parked on the track. Off we go to the sea! 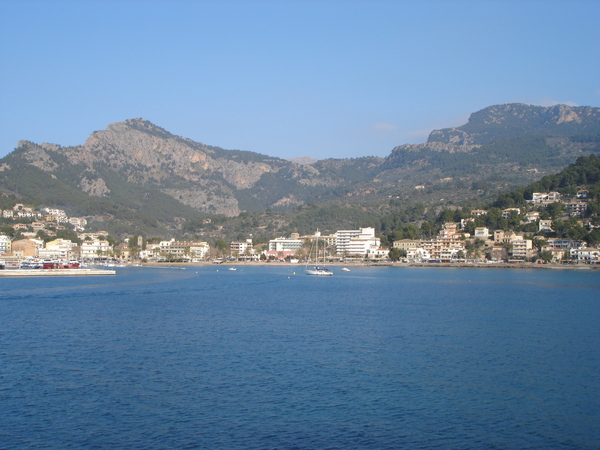 The upmarket resort village of Soller. Thanks to the mild winter climate (it was 20 degrees Celsius during the day on Mallorca while it was -5 degrees Celsius back in Zurich! See the difference??), Soller is the preferred destination for many rich old pensioners from central and northern Europe. There are several excellent seafood restaurants serving fresh catch of the day at reasonable prices.
One thing I like about Mallorca is, in spite of the tens of millions of tourists who visit the island annually, the islanders are extremely friendly and have none of the arrogance or hype that you so often see at other popular holiday destinations such as Paris or Rome. No shopkeepers or restaurant owners who try to overcharge tourists from abroad, no unfriendly bus drivers or waiters who pretend you don't exist. Even at a posh place like Soller, everybody greets you with an unassuming smile and a 'Hola!' and  they are all eager to help you the best they can. Once when I was strolling up the hill overlooking the Bay of Soller, I entered the beautiful roof garden of an expensive-looking restaurant in order to take some photos. The owner kindly invited me to walk around, show me around to take as many photos as I liked. Such genuine hospitality would be almost impossible in Paris or Rome. 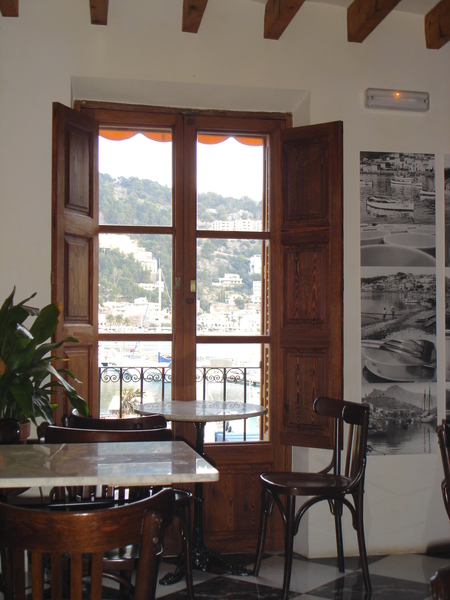 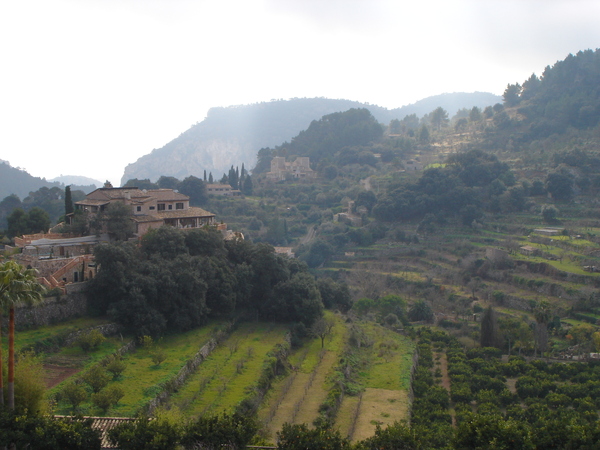 Olive grooves and hills near Valldemossa, a destination of choice among Europe's high society and elite  circles. Polish composer Frederic Chopin and his lover and feminist writer George Sand spent a few months between 1838-1839 staying at a local monastry (Royal Charthouse of Jesus of Nazareth, built from the first years of the 14th century) in order for Chopin, who suffered from tuberculosis, to escape the harsh Parisian winter. Sand's novel 'A Winter on Mallorca' describes their experience of the island.
Another prominent literary figure that spent some time in Valldemossa was the internationally renown  Argentine author, Jorge Luis Borges (1899-1986), who lived with his parents and his sister in the village after 1918.
xxxxxxxxxxxxxxxxxxxxxxxxxxxxxxxxxxxxxxxxxxxxxxxxxxxxxxxxxxxxxxxxxxxxxxxxxxxxxxxxxxx
B) Fornalutx 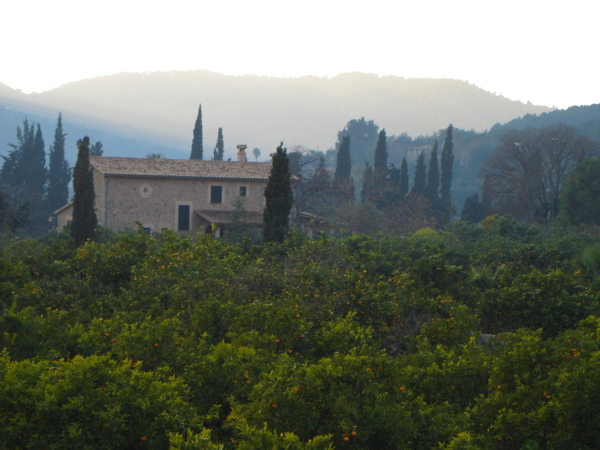