After spenting one week in the really really beautiful village of Molivos on the island of Lesbos, I decided to move on to the next island - Limnos (Lemnos), because I read it somewhere that the harbour of Myrina at Limnos is one of the prettiest harbours in Greece.
Because the cheapest hotel accommodation I could find online prior to my arrival on Limnos was more than 70 euro per night, I thought it would make sense to look for cheaper alternatives once I arrived. This turned out to be a grave strategic error, as I found out (after walking around the whole town for more than an hour) that all hotels on Limnos were booked out because it was a major holiday week in Greece: even the most expensive hotel on the island, where I had to pay 90 euro for a single room, was fully booked. Since I am not the kind of person to stay overnight on a bench near the harbour, I decided to take the night ferry to Thessaloniki one day earlier than planned and sleep on the Thessaloniki-bound ferry instead.
The overnight ferry from Mytilini arrived early in the morning at 0700 and I was a bit disappointed by the view of Myrina. The harbour is quite pretty but it is not as beautiful as I had imagined: it looks more Irish in terms of flaire than Aegean (if you know what I mean). The white washed houses, with outdoor cafes (still closed when I arrived) and little lanes remind me of some seaside villages in County Kerry, Ireland. Even the shopfronts and the way houses are laid out around the town are really Irish-like. There are a few taverns next to the little fishing harbour but it was so early in the morning, everything was quiet.
Once I came to the conclusion that no accommodation whatsoever was available on this island on that particular day, I decided to enjoy myself a bit before the overnight trip on a ferry for a second time in two days. I found a nice cafe on top of the hill overlooking the pretty bay near Myrina and spent at least 3 hours there sipping coffee and admiring the scenery: 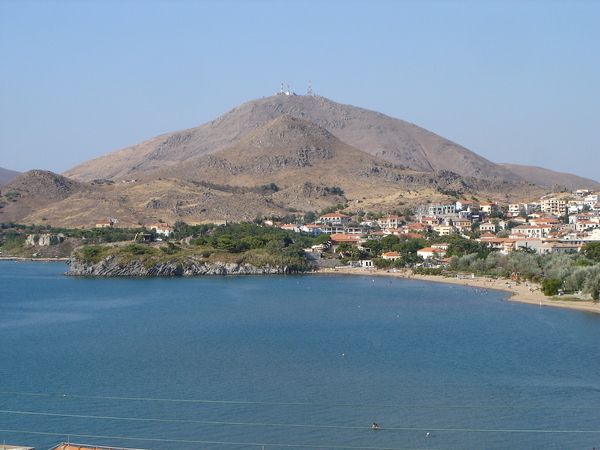 Another side of the bay, with hotels and guesthouses (all of them fully booked!) - and nice cafes and taverns along the waterfront. It would have been lovely to spend a few days on this island. 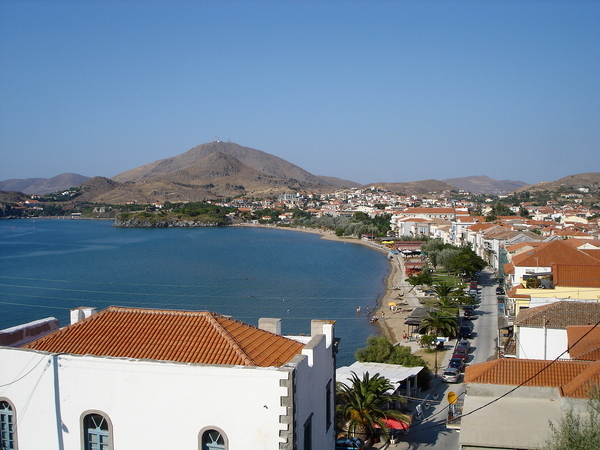 Prices on Limnos are high: although the island is not well-known outside of Greece, many Greeks come to Limnos for its rugged scenery and good sandy beaches. The eastern half of the island is well-known for wild fishing. Limnos is actually an interesting place, historically - more interesting than it first appears but I only realised that after my visit. It was on board an Allies warship stationed in the Bay of Mudros, in the eastern half of Limnos, that the armistice between the Allies and the Ottoman Empire was signed in 1917, bringing the First War World in the Middle East/Eastern Mediterranean War Theater to an end. As a result of Ottoman Empire's surrender to the Allies, British forces took control of the Gallipoli Penisula and the Dardanelles. 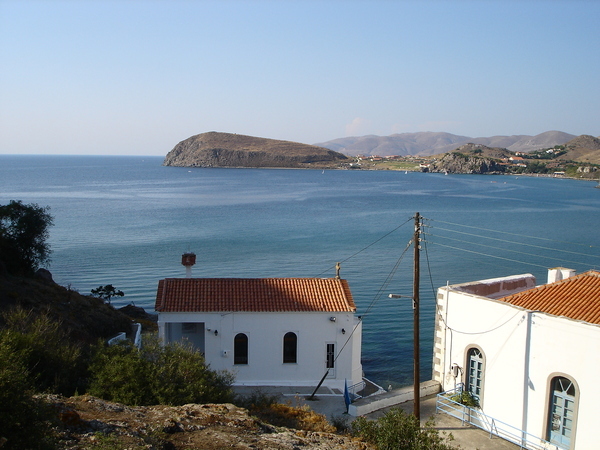 But I would always remember Limnos as 'the island where Greece's best honey comes from': well, I had left my bags at a local store selling locally produced wines, goat cheese, honey etc, The guy who ran the store is a fan of AEK Athens and we started chatting about football. As Limnos is also well-known (within Greece) for its white sweet Muscadet, I decided to try out some wines and cheeses, all produced by the owner's family on his family vineyards and family farms. The goat cheeses taste great together with the wine. However, the only thing I could take with me is the local speciality: thyme honey, because it needs neither refrigating nor special protection. In addition, thyme honey is not available elsewhere in the world, and it is said that the best thyme honey in the whole of Greece comes from Northern Aegean.
Indeed, on the metal can it is stated: Greek Honey Is the Best ...... (I should have taken a photo of that can!)
Next time I think I will spend 1-2 days on the eastern part of the island, where the vineyards and honey farms are. Of course, I will make sure I book the hotel accommodation in advance....

Copyright 2008. All text and photos by YC Cheng. All Rights Reserved.